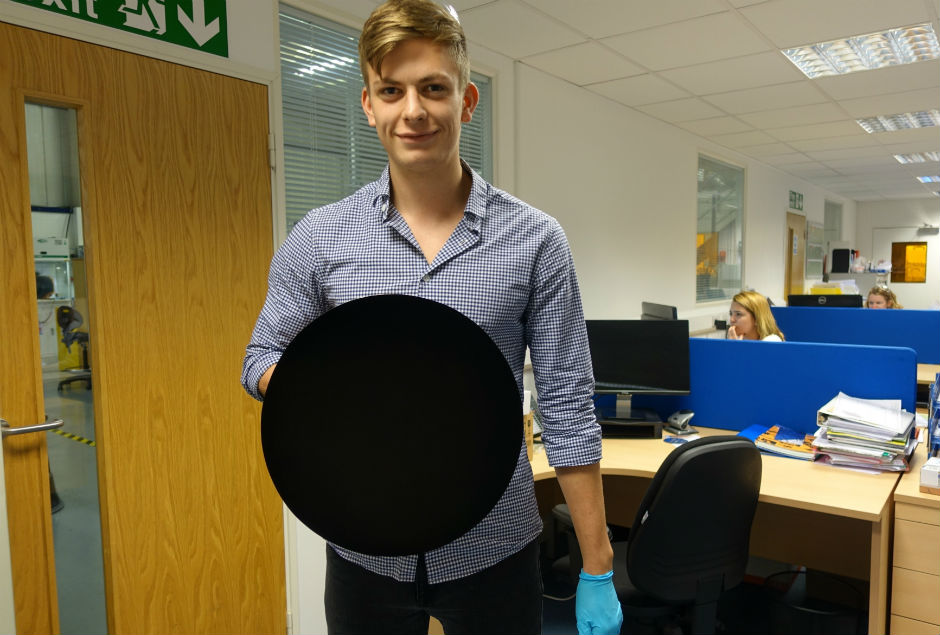 This circular object has been sprayed with the world’s blackest material. (Photo courtesy of Surrey NanoSystems)

The name Vantablack® stands for Vertically Aligned Nanotube Array black.  It is so dark, it’s almost impossible for the human eye to see it.  We need some form of reflected light for our brains to be able to process the pitch-black image.

The Surrey NanoSystems team says the observer’s ability to perceive gets confused.  And some people say looking at Vantablack is like looking into a bottomless hole.

Vantablack is not a paint, fabric, or pigment.  In essence, it is actually a special coating made from millions of carbon nanotubes — each one measuring around 20 nanometers.  That’s nearly 3,500 times smaller than a human hair.

Surrey NanoSystems explain that no spectrometer in the world was powerful enough to measure how much light it absorbs.

“Even running a high power laser pointer across it barely reflects anything back to the viewer.  We have never before made a material so ‘black’ that it can’t be picked up on our spectrometers in the infrared.”

The Marvel of Modern Science

Here’s what Vantablack looks like when it’s sprayed on a three-dimensional face mask.  All features are non-existent to our eyes.

This image is not Photoshop 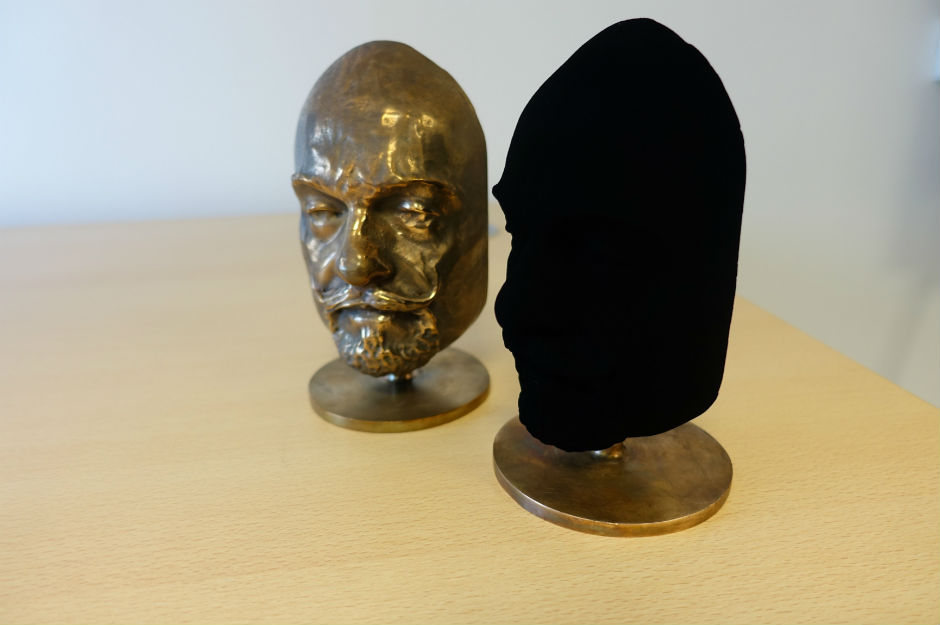 Here’s what Vantablack looks like when it’s sprayed on a three-dimensional face mask, rendering all the features non-existent to our eyes. (Photo courtesy of Surrey NanoSystems)

The Surrey NanoSystems team has now released a ‘spray-on’ version, called Vantablack S-VIS.  As a result, the spray now allows them to apply Vantablack to much larger objects.

Additionally, Vantablack’s use to calibrate telescopes, astronomical cameras, and infrared scanning systems to get better readings is especial relevant.

“Vantablack is a major breakthrough by UK industry in the application of nanotechnology to optical instrumentation.  For example, it reduces stray-light, improving the ability of sensitive telescopes to see the faintest stars, and allows the use of smaller, lighter sources in space-borne black body calibration systems. Its ultra-low reflectance improves the sensitivity of terrestrial, space and air-borne instrumentation.”

Vantablack S-VIS is not available in the retail market.  However, if you work at a museum or university, you might be able to get a sample of this amazing product.

Until then, we’ll just have to wait and marvel at the possibilities and Surrey NanoSystems’ Vantablack breakthrough in the field of modern science.