﻿In most cases, a volcanic eruption is a local event. Lava flow tends to reach only a few miles, while airborne soot and ash travel a little farther. However, occasionally, larger eruptions can launch particles into the stratosphere, more than six miles above Earth’s surface.

These newly discovered findings are critically important for understanding the role of volcanic eruptions on climate, and perhaps, for understanding certain events in human history, such as widespread famines. 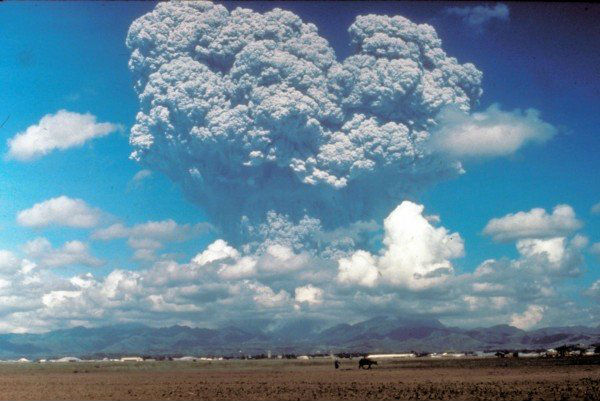 Credit: Dave Harlow/USGS
This photo, taken on June 12, 1991, shows the eruption column of Mount Pinatubo on Luzon Island in the Philippines. The eruption–the largest on Earth in the past 100 years–ejected particles into the stratosphere, more than 6 miles above the planet’s surface.

Researchers made some important revisions to the known history of big volcanic eruptions — correcting the record on several misidentified events.  In addition, they discovered a few (yet unknown) stratospheric eruptions. The researchers described their approach, which identifies airborne volcanic particles with a specific chemical signature.

The 1991 volcanic eruption of Mount Pinatubo in the Philippines — the world’s largest eruption in the past 100 years — is a prime example of a stratospheric eruption. When volcanic eruption particles reach the stratosphere, they stay in the air for a long time, reflecting sunlight and temporarily cooling the planet.

Eventually, volcanic eruption particles fall from the stratosphere, settling on the ground below. When they land on snow, the particles are covered up by more snow that gets compacted into ice. This preserves a record of the eruption that survives until the ice melts. Researchers can drill and retrieve ice cores in places like Antarctica and Greenland, revealing volcanic eruption records that stretch back several thousand years.

By our understanding the history of these big eruptions, researchers can begin to place short cooling episodes and other discrete climate events into the context of large-scale climate patterns.

Researchers working at the University of Maryland, the Université Grenoble Alpes in France, the Ecole Normale Supérieure in France, and the Tokyo Institute of Technology have devised a new, more accurate system for identifying large stratospheric eruptions recorded in the layers of Antarctic ice cores.

James Farquhar, a professor of geology at UMD and a co-author of the research paper published January 28, 2019, in the journal Nature Communications shared his excitement.

“I find it very exciting that we are able to use chemical signals to build a highly accurate record of large, climate-relevant stratospheric eruptions. This historical record will be highly useful for climate scientists seeking to understand the role of large eruptions in climate oscillations. But there is also the basic marvel of reading a chemical fingerprint that is left behind in ice.”

If the same layers of sulfate showed up in both cores, deposited at the same time in Earth’s history, researchers would conclude that the particles came from the same large, stratospheric eruption.

“For eruptions that are intense enough to inject material into the stratosphere, there is a telltale signature in the sulfur isotope ratios of sulfate preserved in ancient ice layers.  By instead focusing on this distinct sulfur isotope signature, our new method yielded some surprising and useful results. We found that prior reconstructions missed some stratospheric events and falsely identified others.”

The study’s lead author, Elsa Gautier from the Université Grenoble Alpes, did a significant portion of the analyses at UMD. Following Gautier’s lead, the researchers developed their method using ice cores collected at a remote site in Antarctica called Dome C.

One of the highest points on the Antarctic ice sheet, Dome C is home to ice layers that stretch back nearly 50,000 years. Gautier and her colleague Joel Savarino, also at the Université Grenoble Alpes, collected ice cores at Dome C that contain records stretching back roughly 2,600 years, covering a large portion of recorded human history.

The researchers used their method to confirm that many events had indeed been properly identified by the older method of matching up corresponding sulfate layers in ice cores from both hemispheres. However, some events, formerly thought to be big stratospheric eruptions, didn’t have the revealing sulfur isotope signature in their sulfate layers.

Instead, the researchers concluded, two or more smaller volcanoes that erupted at about the same time at high latitudes in both hemispheres must have deposited these layers.

The researchers also found some big stratospheric events that contain the isotope signature, but were somehow constrained to the Southern Hemisphere.

“This is a strength of our approach, because these events would have a climate impact but are missed by other methods.  We have made a significant improvement to the reconstruction of large stratospheric eruptions that occurred over the past 2,600 years. This is critically important for understanding the role of volcanic eruptions on climate and possibly for understanding certain events in human history, such as widespread famines. It can also help to inform future climate models that will take large volcanic events into account.”

The research paper, “2600 years of stratospheric volcanism through sulfate isotopes,” was published in the journal Nature Communications on January 28, 2019.